Ace Natural, a regional distributor of organic produce, switched from solid waste haulers to dispose of organic waste to an LFC biodigester installed on their property. The LFC biodigester biologically decomposes solids into grey water that drains into sanitary sewer lines. The move to LFC eliminated the space, labor and odor associated with solid waste storage and the disposal cost of trucking the solid waste. At the same time, the biodigester spares the environment of the methane and 100+ tons per year of carbon dioxide, the waste previously emitted when decomposing on land.

“Previously, we collected and wrapped outdated and damaged produce on pallets, stored it in the warehouse refrigerator, and shipped it weekly to a solids composting facility, at significant cost,” says Eddie Rodriquez, warehouse manager, adding, “Our LFC eliminates these costs and frees up valuable refrigerator space.”

Manufactured by Power Knot LLC of San Jose, CA, the model LFC-300 bio-digester uses natural microbes and enzymes, along with automated infusions of hot and cold water in the presence of oxygen, to aerobically turn solid food into liquid that drains continuously into ordinary municipal waste piping. Food waste can be added to the unit at any time and requires about 24 hours to become wastewater, allowing the company to dispose of up to 1,200 lb. (540 kg) of solid waste per day.

How Solids Become Liquids in 24 hours

The LFC unit consists of a U-shaped vessel with a horizontal agitator that slowly rotates to maximize contact between solid food waste, bacteria, enzymes, air, and water boosting the rate of decomposition. Powerzyme™ proprietary blend of enzymes and microbes are housed in porous plastic chips that remain in the vessel, creating a large surface area to accelerate the rate of decomposition. The process is exothermic and raises the vessel temperature to about 108° F (42° C) which further accelerates the process.

Susanne Kauderer, northeast sustainability business development at Power Knot, notes that the Powerzyme in the digester remains effective for as long as a year before it needs to be replenished.

Liquids resulting from biodigestion drain continuously through a screen along the bottom of the vessel, through a drain at one end of the vessel and into a standard sewer line that, in this case, is shared with an adjacent sink. 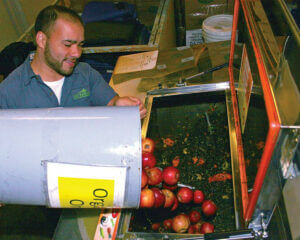 “Everyone was surprised at how easy it is to use the machine,” says Rodriquez. An employee typically loads the LFC with food waste three times a day.

The continuous process produces water and carbon dioxide, which is part of the natural cycle of carbon generation from food waste, making the process carbon neutral according to the company.

By contrast, decomposition of food waste in a landfill generates methane, which is 84 times more harmful environmentally than carbon dioxide.

Mounted on four load cells, the LFC unit weighs the waste that is added and digested to an accuracy of +/- 1 percent. The computer on the LFC biodigester generates statistics and graphs that report on performance hourly, daily, weekly, monthly and yearly.

The machine’s touchscreen displays the current weight of waste being digested, the amount of additional waste that can be added, and when enzymes should be added,” says Kauderer.

Kauderer says, “The LFC at Ace never turns off. Even if not in use, the agitator slowly rotates to digest the remnants of whatever remains, quietly and odor-free.”

From the LFC’s reports, Gonzalez estimates that in the unit’s first 9 months of operation, Ace Natural reduced its carbon footprint by 78 tons (71 tonnes). Ace shares this information with customers who ask about sustainability in food disposal. The distributor hasn’t yet promoted the savings in its marketing, but may soon make it part of a promotional campaign.

“We are an environmentally and socially motivated company,” says Gonzalez. “We try and walk the walk when it comes to minimizing our carbon footprint.”

Ace voluntarily works with a Belgian organization called CO2 Logic that promotes carbon neutral certifications of global companies that meet select environmental criteria. The distributor also operates a hybrid electric fleet of 10 delivery trucks that run on biodiesel fuel, generates its own solar energy, and uses recycled paper, among other initiatives. When CO2 emissions are unavoidable, Ace purchases carbon offsets, which Gonzalez says are applied to sustainable projects in Uganda.

Ace Natural supplies organic produce from a 20,000 sq ft (1,900 m²) warehouse in Long Island City to stores, restaurants, caterers, bakeries, hotels, and distributors. It sources 80 percent of its products from the tri-state area of New York, New Jersey, and Connecticut, as well from California, Florida, and Pennsylvania. Customers are mostly in the tri-state area, although distribution extends to Massachusetts, Pennsylvania, Maryland and Florida.

Ace Natural has plans to move to a larger facility in nearby Westchester County, NY.